For over 80 years, Kawartha Dairy has been proud to be a 100% Canadian-owned company, still operated by the same family that started it back in the beginning. Although it has grown tremendously from its early days, it remains headquartered in Bobcaygeon, Ontario, where it was founded. In 1937 Jack and Ila Crowe took a leap of faith and bought a small dairy in Bobcaygeon. Jack had learned the trade while working for Oshawa Dairy but the newly renamed Kawartha Dairy didn’t bear much resemblance to that larger big city firm. At that time it consisted of a small, simple three room building, where the cold storage area was cooled with ice cut from the lake. 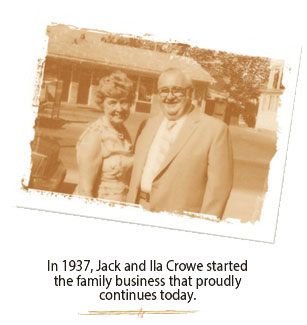 Local farms provided the milk which was picked up in 80 lb galvanized steel cans by wagons in the summer and sleigh in the winter. In those days, all of the milk was delivered to homes by horse or to cottages by boat. The business continued to grow and in 1942 Jack and Ila bought one of the other dairies operating in Bobcaygeon. At this time, Kawartha Dairy did not produce ice cream but that would change in the mid ’50s when Jack went back to school to learn the craft. It was a shrewd business decision, but even Jack likely had no idea how beloved Kawartha Dairy ice cream would become in the years ahead.

The early 1960′s saw the company expand to Minden, where it opened a depot and its now famous dairy bar. Although the office and plant are in Bobcaygeon, to many cottagers and summer visitors the heart of Kawartha Dairy lies in Minden, where stopping for a cone is an essential part of summer. Today Kawartha Dairy operates 10 retail stores and services a wide range of wholesale customers, from retail outlets to foodservice establishments and of course, ice cream parlours. The company also provides custom production services to other food companies, using Kawartha’s expertise in the business to produce ice cream and other specialty dairy items to the exact specifications of these firms.

Situated in a bountiful farming region, the dairy receives deliveries of fresh milk daily, most of which is from the local area and all of which is from Ontario farms. The members of the Crowe family would like to take the opportunity to thank both their loyal customers and the farmers who supply them. Without their support over the years, the company simply could not have grown and prospered the way it has.